Tuning forks are used in various fields from acoustics to medical diagnostics. In their miniature form tuning forks made of Quartz crystal are used in watches for measuring time.

40 years in the Industry

Tuning forks have been commonly used in the industry since the 1970s. They were introduced as alternatives to Rotating Paddle Level Switches.

Vibrating Fork Level Sensors have stood the test of time and continue to dominate the point level switch market.

Sapcon Instruments has been manufacturing vibrating fork level sensors since its inception in the year 1983. Since then, Vibrating fork has evolved into a much more compact and faster level switch. The success and popularity of these level sensors can largely be attributed to:

How do the tuning fork tines vibrate?

Pressure applied by the piezoelectric stack on the diaphram causes it to shear, which in turn drives the tines apart from each other. See the figure below for a simulation of the process. When the pressure is removed the tines return to their orginal position.

The application of force when applied at the fork's Natural Frequency makes the it oscillate at its maximum amplitude for a given power.

How does the level sensor detect application media?

A tuning fork sensor vibrating continuously at its natural frequency is monitored for two specific paraments:

As the material level increases and comes in contact with the Vibrating Fork tines, the amplitude of osciallation of tuning fork level switch dampens. When the amplitude goes below a set threshold, the onboard electronics causes a change to the outputs(Relays/ PNP).

The natural frequency of tuning fork increases with increase in the length of tines. in two rows, one for solid and another for liquid

A comparison of the tuning forks vis-a-vis their performance and end-use has been shown below for a better understanding.

On site settings and configuration 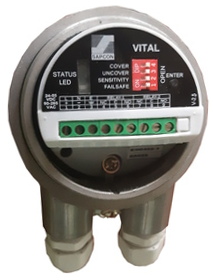 No comments yet. Start a new discussion.